A Good Day To Die: Sea Shepherd Founder Captain Paul Watson On The Compassion Behind Confrontation 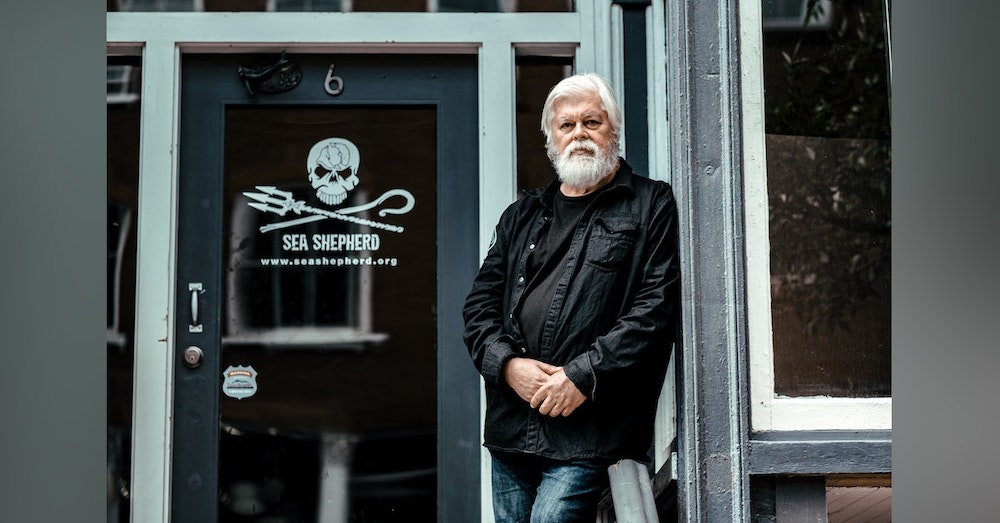 In this episode, my conversation with Captain Paul Watson, founder of Sea Shepherd, the environmental organization known for interventions with whaling ships around the world.

Paul has been at the forefront of the ocean environment for years and was seminal in the foundation of two renowned organizations, Greenpeace, and then years later, Sea Shepherd.

Sea Shepherd - and Caption Paul himself - can evoke strong feelings from people, particularly as Paul himself has been at the helm of ships that have boarded, rammed and sunk multiple whaling vessels around the world.

Regardless of what anyone might think about his tactics on the sea, I wanted to understand more about what motivated him… why he felt such a deep connection to the whale and the ocean and what pushed him into protecting the ocean in such an active and controversial way.

And perhaps unsurprisingly, Paul turned out to be a warm, funny and engaging man of great intellect… and whose passion was less about confrontation, and much more about compassion.

Please give us ★★★★★, leave a review, and tell your friends about us as each share and like makes a difference.

Hi, and welcome to the big deep podcast. Big deep is a podcast about people who have connection to the ocean, people for whom that connection is so strong. It defines some aspect of their life . Over the course of this series. We'll talk to all sorts of people. And in each episode, we'll explore the deeper meaning of that connection. In our season two premiere, we speak with captain Paul Watson principal, founder of the sea shepherd environmental organization. Hello, this is your host, Jason Ellis. Welcome to the big D podcast.

If I go back when I was like, Oh, eight years old, I almost died. We were playing pirates. I was tied to the master of a sunken ship by a bunch of the other kids and they forgot me. The tide was coming in and it kept getting higher and higher and nobody was there. And I was yelling for help. At one point, when the water was up to my chest, I , I just sort of resigned myself to the fact that I was going to drown. What saved me was that some teenage boys heard me and came in and cut me loose after that. I've really not felt any fear. Once you're overcome the fear of dying, then you're not afraid of anything. Not afraid of speaking, not afraid of acting was Miyamoto. Musashi who said the acceptance of death is the way of the warrior. It's the reality everybody's going to die. It's more how you live .

That's always been something that's guided me. I would say that fear is not a factor in my life. Really. That's an amazing story to hear considering the trajectory of your life has taken. You obviously have this amazing life history that has kept you active and involved from the time you were eight years old until now your passions could have manifested in any number of ways. What is it about the ocean? Why the ocean is there some special connection you have to the ocean? And if so, can you tell me what that feeling for you is? The ocean is the life support system of the entire planet. And as I say over and over again at the ocean dies, we all die. 70% of the oxygen that we breathe is produced by phytoplankton since 1950, there's been a 40% diminishment in phytoplankton population. And why are phytoplankton populations being diminished? Because their food supply, the nutrients, nitrogen and iron come from whales , Marine mammals and seabirds, one blue whale, everyday decades, three tons of manure, which floats on the surface and provides the nutrient base for the phytoplankton. And they also, they go deep diving. They bring up those nutrients from the depths and deposited them on the surface. It's called the whale pump. So whales in many respect are the farmers of the ocean. And the crop is oxygen that every other species gets to breathe. I became very aware a long time ago, the interconnections between all these different species, you know, for hundreds and hundreds of years, the chairman's in Polynesia, they would declare an area, say a Bay in Bora Bora. This area is comparable. There will be no fishing in this Bay for 20 years. And if anybody was caught fishing , it was the death penalty because they knew that if the fish disappeared, so would they? I said, sea shepherd up to intervene basically as an anti-poaching organization, this 4 million fishing vessels out there in 40% of them are illegal. So my ultimate goal is to protect the ocean and that's going to require some really radical interventions. And in 1986, we signed half of Iceland's whaling fleet. And a former colleague from Greenpeace came to me and he said, you know, I just want to let you know that what you did in Iceland was reprehensible. And that's an embarrassment to this whole movement. I said, really, John, I didn't sink those ships for you. I didn't sink them for Greenpeace. Didn't sink them for any so-called movement. In fact, I didn't sync them for any human being on the planet. John, we sank those ships for the whales, find me one whale anywhere in the world that disagreed with what we did that day. And I promise you, I won't do it again. The whales are our clients. The sharks are our clients. The fish are our clients, and that's what we do. We protect. And we preserve, and we depend Atlanta here. One experience on the water that really resonated with you in some way and stuck with you. There's something very moving or important to you. Well, I did have an experience in 1975 during the first Greenpeace campaign to protect the whales. We had come up with this idea to confront the Soviet whaling fleet. And we searched for them for two months. They finally found them about 60 miles West of Mendocino in California. We hadn't been reading a lot of Gandhi at the time, and we thought that the best way to save the whales was to put our bodies between the harpoons and the whales and that they wouldn't kill us in order to kill the whales. So in June of 1975, Robert Hunter and I were in a small inflatable boat and we were racing in front of a Soviet harpoon vessel in front of us were eight magnificent sperm whales that were swimming, frantically trying to escape. And every time the harpooners began to maneuver, I would Nuber our boat to block them . And this worked for about 20 minutes until the captain on the Soviet vessel came running down the catwalk and he screamed into the harpooners ear, looked at us, smiled and brought his finger across his neck. And that's when I realized Gandhi, wasn't going to be much use to us that day. A few minutes later, there's this horrendous explosion in the Harper . It's a 250 pound bomb really flew right over our head and slammed into the backside of one of the whales and the pod. And it was a female and she rolled on her side. There's blood everywhere. She screamed. I never even knew a whale could scream at them . The cable to the harpoon slashed down, just narrowly missed our boat. And suddenly the largest whale in the pod Rose up, slapped the surface of the water with his tail and dove. And he swam right underneath of us, then threw himself at the bow of the Soviet vessel, giving time for the others to escape, but they were ready for him with a unattached harpoon. The harpoon were pulled the trigger point blank range,

There's a terrific explosion. The whale fell back leading thrashing about an agony on the surface we approached and I caught his eye and suddenly he dove and I saw a trail of bloody bubbles coming at us real fast. He came up and out of the water at an angle so that the next move would be to come down and crush us. And as his head Rose up out of the water, and I saw this, I only about three feet

From me, so close.

I could see myself in the reflection in his eye.

I felt something was understanding the whale understood what we were trying to do, because

I could see the effort that he made to pull himself back.

His head began to slip back and as I flipped beneath the waves and he died,

He could have killed us, then chose not to do so. So personally, I feel indebted to that whale , to the fact that I'm alive, but I also felt something else. And that was pity and not for himself, but for us that we could take life. So senselessly with spotlessly . And as I was sitting there in the midst of the Soviet whaling fleet, as the sun was going down, and I said to myself, why are they killing these whales?

You can't eat sperm, whale meat they're killed for oil

Swarm of Saudi oil is especially valuable on one of the things that it was used for by the Soviets is in the construction of Intercontinental ballistic missiles.

And I said to myself,

Pure , we are destroying this incredibly beautiful self-aware Senti creature For the purpose of making a weapon meant for the mass extermination of human beings.

And that's when it struck me were insane.

And I said, at that moment,

I'm going to do everything I can to defend them, not for us, but for them. And that's what I've dedicated my life to ever since.

Thanks for listening to the big D podcast. Next time on big, deep streaking, down the line of the waves , thinking about the rhythm of the swells and the cracking curl, how I really felt was there just wasn't anything more worth doing there wasn't any other reason to be. We really appreciate you being on this journey into the big deep, as we explore an ocean of stories. If you like what we're doing, please make sure to subscribe wherever you listen to podcasts. Also, please like, and comment because those subscribes likes and comments really make a difference for more interviews, deeper discussions with our guests, photos and updates on anything. You've heard. There's a lot more content at our website, big deep doc . Plus if you know someone who Snick , we should talk to let us know what our big DEET website is . We are always looking to hear more stories from interesting people who are deeply connected to our world's oceans. Thanks again for joining us.